The launch of the 4th Heritage Initiative will take place on 12th September 2022. The author Emmanuel Kirunda, says he wrote the 4th Heritage in 2008 while in Texas, USA. He was inspired in 2003 after reading Prof. Ali A. Mazrui’s book, The Africans, A Triple Heritage. 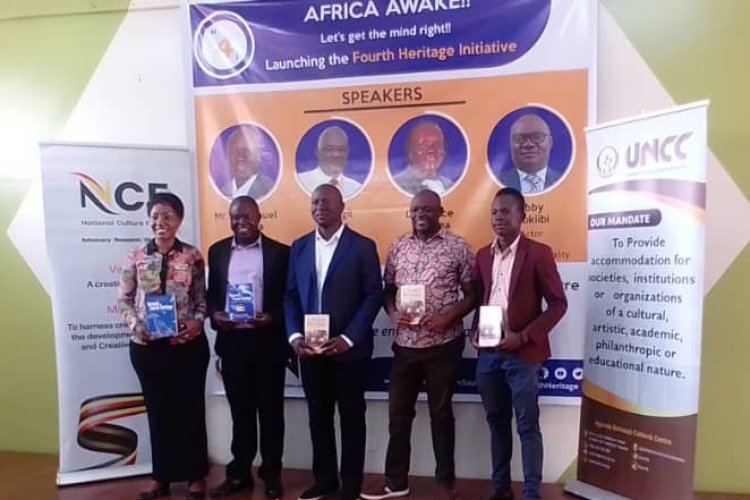 The launch of the 4th Heritage Initiative will take place on 12th September 2022. The author Emmanuel Kirunda, says he wrote the 4th Heritage in 2008 while in Texas, USA. He was inspired in 2003 after reading Prof. Ali A. Mazrui’s book, The Africans, A Triple Heritage.

The Speakers during the Launch will include; Mr. Emmanuel Kirunda(Author, Chairman and Founder), Mr. Fagil Mandy (Educationalist, Founder, Director), Dr. Grace Baguma(Director, National Curriculum Development Centre (NCDC) Kampala) and Hajji Abbey Mukiibi (Actor and Media personality). According to Mr. Emmanuel Kirunda, Africa’s problems come from having no heritage at all.

Mr. Andrew Ssebagala, Production Manager, Uganda National Cultural Centre says this is part of UNCC’s community mobilization and mindset program and they welcome any stakeholder who promotes art, films, reading, culture and entertainment as a whole for the betterment of society.

Meanwhile, according to Mr. Idd Batambuze of the National Book Trust of Uganda, and also the Vice Chairperson of the National Cultural Forum, revealed that 1683 books were authored in 2021, the largest number ever and said Ugandans must love reading and change their minds to achieve greatness.

“Government through NDP III have a whole program on mindset change and have invested a lot of money in it. They have invested in many economic empowering programs like Parish Development model, Emyooga, Youth Livelihood Fund, yet Ugandans are not changing economically hence the need to change their mindsets through reading, Mr. Batambuze advised.

He revealed that the National Book Trust of Uganda (NABOTU) will work with Mr. Kirunda to distribute his books across over 300 public and private bookshops countrywide.

1. A lecture on ‘How we Africans can change our mindsets now and, in the future,’ MINDSHIFT 2090 – by Emmanuel S. Kirunda.
2. A presentation about capacity building via education transformation titled TRANSFORMING THE AFRICAN THROUGH EDUCATION SYSTEMS – by Fagil Mandy.
3. Testimonials by four readers of the Fourth Heritage books
4. Roll out of the Plan of activities for the Organization.

1. Nick Twinamatsiko: What will crank up African evolution to gear four and beyond? If you believe Mr. Kirunda – and I have to say he is quite credible – it’s the adoption of a fourth heritage and a ‘heri’. Even if you dismiss his views, you can’t deny that his book is a potential trigger of the most important debate that we ought to have as Africans.

2. Awel Uwihanganye: Beyond the Fourth Heritage was one of the most consequential readings I have ever encountered. It connected me with the author in an almost spiritual way. Arguments on the identity of the African as the unfinished business that hinders our progress are compelling.

Monday 12th September 2022, from 2pm – 6 pm, then a journal session and networking from 6pm-12am, at Uganda National Theatre and virtually via ZOOM, Youtube and Facebook .

The spirit behind the formation of this organization is to create a platform to foster and facilitate transformation of the African mind which is characterized by six habitual killer mindsets of Victimhood, Inferiority complex, self-hate, “copycatism”, herd mentality and the Elite Dilemma; in a bid to create a new African mindset which transcends the limiting aspects and effects of our heritages of birth.

Through this organization, it is intended that more and more Africans will be trained and inspired to develop a reading and writing culture just as our ancestors (who were the earliest pioneers of civilization) had. Since 2009 when his first book was published, Mr. Kirunda has held a number of public events to publicise the ideas in his books, starting with book events in Texas and Pennsylvania, U.S.A (right after publishing the first book), to presenting to Ugandans in North America at the UNAA conference in September 2009, to having 3 retreats in Uganda for those who had read his books (between 2015 and 2018), as well as two book launch events; the launch of his third book Beyond the Fourth Heritage in November 2016 , and the launch of its Uganda edition in December 2017. In 2019, Mr. Kirunda and some of the readers of his books registered an Organisation in Uganda named “The Fourth Heritage Initiative”. However, due to the Covid – 19 pandemic, it was never launched to start carrying out its activities as planned. During the Covid - 19 lockdown, Mr. Kirunda started a YouTube Channel named “4thHeritage Mindset” via which he produced and published a series of 80 episodes centred around changing African mindsets. The channel has since garnered more than 6000 views. Mr. Kirunda has also been featured on Mr. Robert Kabushenga’s 360 Mentor program.

Bearing in mind the above background, it is time to officially launch The Fourth Heritage Initiative to enable us to start executing our planned activities in order to catalyse the much-needed change of mindsets.

Objectives of the Launch:

This proposed launch which will be held as a significant public event will be aimed at creating awareness among the people in Uganda, and the wider world about the revolutionary ideas in the two books and how the Organisation plans to disseminate these ideas over the coming years. The Purpose, Vision and Mission of the Organisation are as follows:

The reason we exist is to inspire the change of African mindsets. Vision: To be the foremost mindset transformation organisation in Africa. Mission: To create the new African who is critical and able to transcend the limiting factors caused by our heritages of birth.

Guiding Questions During this proposed event, participants will reflect on and work to address a number of questions as follows:

1. Can we Africans create an organization whose number one aim is to inspire the change of mindsets, rather than focusing on reasons as to why we are victims of history?
2. Can we inspire our fellow Africans to start reading and writing books, as opposed to relying only on oral tradition?
3. Can we create an organization that is not about politics, tribal or religious issues, but one focused 100% on exploring ideas to change our African mindsets?
4. Can any African objectively deny the fact that we suffer from the six killer mindsets of Victimhood, Inferiority Complex, Self-hate, “Copycatism”, Herd Mentality and the Elite Dilemma?
5. Can we inspire ourselves to transcend the limiting psychologies we inherit through our tribes, religions and colonial heritages of birth.

The following are the Board of Directors of the 4th Heritage Initiative;

Emmanuel S. Kirunda is the author of the books that inspired the creation of The Fourth Heritage Initiation. The books are: The Fourth Heritage (2009), The Fourth Republic (2011) and Beyond the Fourth Heritage (2017). He has also authored two papers on the same topic of transforming African mindsets: The EDISAC Framework (2021), and Mindshift 2090 (2022). Born and raised in Uganda, Mr. Kirunda went to the U.S after his O Levels, where he studied his Bachelor’s and Master’s degrees.

He started his career as a Civil Engineer in the U.S but afterwards has spent more than 16 years of a global experience as a PMI-Certified Professional Project Manager in the Infrastructure, Financial Services and Oil Gas sectors in Uganda, Ghana, and several European countries.

Mr. Kirunda currently lives in the U.K with his wife and daughter. He is a holder of an MBA from Cranfield University (UK) and works as the COO Commercial Director of Olwg Ltd – a London-based clean energy company. He enjoys world travel, playing golf and making videos on his YouTube channel (4thHeritage Mindset) which is dedicated to influencing the change of African mindsets.

Fagil Mandy
Director, Education Consultant, Author of ‘Self-Engineering’ and other books about self-improvement.

Books:
Top Secrets of Educating Your Child
Preparing For and Enjoying Retirement
Learning From Home the Mother Of Schools For Your Child
How To Get Ready for The World Out
The Youths and You: How Not To Die Easily
Maximizing Learning from Primary And Secondary Education

Prof. Mercy Mirembe Ntangaare
Director
Prof. Mercy Mirembe is a playwright, folklorist, theatre maker, educationist, and producer of children’s and young people’s theatre with MEBO Theatre Documentaries Limited that she founded in 2006. She is an Associate Professor of Drama at Makerere University Kampala. She writes plays, short stories, essays, and children’s books.

EcONUTA(Food waste company)-Showing love to humanity through fighting food-waste. Mununuzi’s goals and aspirations are to become the smartest person that he can ever be such that he can be able to solve his personal problems and some of the world problems- illiteracy and poor governance. His most impressive achievements include running a book review blog called bookmeal, starting up a food waste company to battle climate change, participating in politics at Makerere as Secretary for mess affairs- Livingstone hall and being an all-round sportsman ( soccer, athletics- short and long races, karate, bodybuilding, swimming and chess). One quirky fact about him is that he is very adventurous and when he gets focused on something, he tends to block out the whole world. His current hobbies are swimming, sprinting, bodybuilding/calisthenics, playing piano, travelling and men’s fashion.

His favorite book is Beyond the Fourth Heritage by Kirunda Emmanuel and his favorite hero is Albert Einstein. Feel free to contact him here.

What are the six killer mindsets?

These are the six self-defeating mindsets that most of us Africans are groomed with by our societies and educational systems. They play a major role in sabotaging our success in modern civilization. They are:

1. Victimhood mentality: Our people have internalized the belief that we are eternal victims of history. We feel powerless to change our state of affairs. Our instinct is to blame every shortcoming in our society on what the outsiders did.

2. Inferiority complex: Most of our people, whether educated or not, feel inferior to non-Africans (specifically Europeans and Arabs).

3. Self-hate: On a deep psychological level, many of our people grow up thinking that every aspect of us is so backward and ugly that they hate themselves.

4. Eagerness to consume foreign things or “Copycatism”: From the physical things that we import to the religions and languages we speak, it is hard to find much in our societies that is independent of non-African creations. Even “our countries” and politics are copycats from outsiders.

5. Herd mentality: Most of our people exist merely as passive members of a group, who just follow groupthink – they do or believe things just because the group does so.

6. The African Elite Dilemma: The more educated and advanced we get in this modern world, the more we are cut off from our spiritual, emotional, and intellectual traditional roots. This causes cognitive dissonance, a mental paralysis. The more modern we get, the more we get cut off from our roots. However, no tree can stand tall without its roots. No wonder, we end up developing two existential civilisational problems. 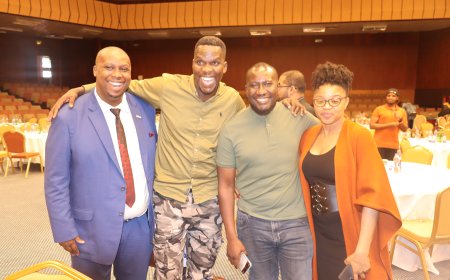