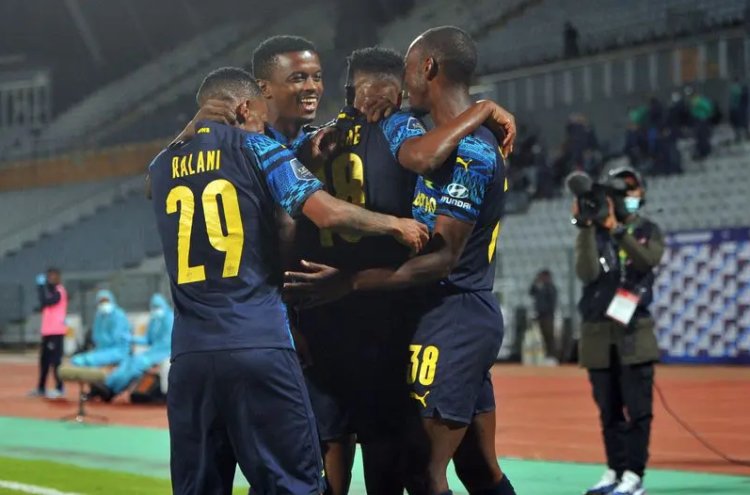 Mamelodi Sundowns’ Peter Shalulile is in superb form ahead of a CAF Champions League quarter-final first leg against Petro de Luanda in Angola on Saturday, 16 April.

The 28-year-old Namibian this week became the first player to score hat-tricks in successive DStv Premiership matches, and took his tally in all competitions this season to 27 goals.

Of the eight contenders, Mamelodi Sundowns, title-holders Al Ahly of Egypt, Raja and Wydad Casablanca of Morocco, Entente Setif of Algeria and Esperance of Tunisia have won the marquee African club competition.

Below, a look at FIVE things to know before the first knockout phase kicks off on Friday, 15 April when Setif host Esperance.

Not since 2005 has South Africa witnessed as consistent and clinical a finisher as Shalulile, who has notched 21 DStv Premiership goals, three in domestic cup competitions and three in the Champions League.

His successive league trebles, away to Swallows and at home against Golden Arrows, have taken Mamelodi Sundowns within seven points of a fifth straight Premiership crown.

Champions League matches kick off at 15:00, 18:00 and 21:00 SA time on Fridays and Saturdays, but the rules have been loosened due to Ramadan, the Muslim holy month.

The six quarter-final fixtures involving north African clubs will begin between 22:00 and 00:00 SA time to accommodate Muslim players, with some ending nearly an hour after midnight local time.

Muslim footballers are permitted to break the dawn-to-dusk food-and-drink fast during Ramadan, but few do so, preferring to eat and drink at night before preparing for matches.

Retired Egyptian football stars differ as to who is the best Ahly coach between South Africa-born incumbent Pitso Mosimane and Portuguese Manuel Jose, who had three stints with the Cairo Red Devils.

It is widely accepted that Jose had an advantage over Mosimane in that he guided arguably the greatest club team in African history, including goalkeeper Essam el Hadary, Gomaa and midfielder Mohamed Aboutrika.

Unlike European governing body UEFA, who scraped the away-goal rule from this season, Africa has stuck with a system which doubles the value of away goals in the event of an aggregate tie after two legs.

However, only two of 40 quarter-finals have been decided by away goals, in favour of USMA of Algeria and Primeiro Agosto of Angola, since the last-eight phase was introduced five seasons ago.

Esperance share with Ahly and Wydad the distinction of qualifying for the quarter-finals every season since they were introduced in 2017.

The team, named after a Tunis cafe where it was formed 103 years ago, are the only one to have won home and away twice in the last-eight phase of the premier African club competition.

This season, Esperance share with Sundowns the distinction of being unbeaten in Champions League qualifying and group matches while Setif have suffered five defeats in 10 matches.