Protesters mark the first anniversary of a non-sectarian protest movement that has rocked the political elite. 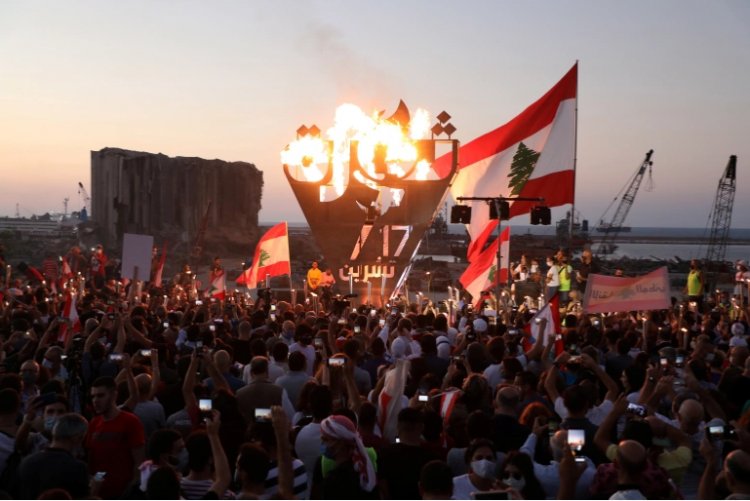 BEIRUT, Lebanon - Protesters in Lebanon on Saturday marked the first anniversary of anti-government protests that lasted for months on October 17.

The Lebanese staged protests in cities to commemorate protests that started against fiscal policies and continued for months with protesters demanding the resignation of political parties that have shared power for years. Hundreds of people gathered in Martyrs Square in Beirut at noon and marched with Lebanese flags to the Association of Banks, before heading to the Central Bank.

Protesters, who also hold the Central Bank responsible for Lebanon's economic crisis, stoned the building. By leaving the site after the intervention of the security forces, the demonstrators concluded their march at the port of Beirut.

About 2,000 demonstrators chanted slogans against political parties and lit torches in memory of those killed in a massive explosion in the port. The August 4 explosion, which rocked Lebanon and caused massive destruction in the capital, came at a time when the country was rocked by a crippling economic crisis amid the outbreak of the coronavirus pandemic.

The explosion killed at least 192 people and injured more than 6,000.

The national unity government formed by the Muslim and Christian parties in parliament planned to impose a fee of $ 6 per month on users of the WhatsApp social media app as part of new communication taxes. The protest in front of the Government Palace during the Council of Ministers meeting on October 17, 2019 on the fiscal-focused 2020 budget negotiations, turned into the largest mass protest in the country's history.

Activists, who flocked to plazas and blocked main roads for about two weeks across the country, prevented public institutions, especially banks and schools, and the private sector, from providing services.  After Prime Minister Saad al-Hariri announced the resignation of the government on October 29, demonstrators continued to protest, demanding the establishment of a government of independent technocrats, the elimination of sectarian parties that are in the administration for years and insisting on elections.

Although protests have been suspended for several months due to the coronavirus outbreak, protesters continue to keep their anger alive on social media.

Lagos under 24-hour lockdown after SARS protesters ‘shot at’